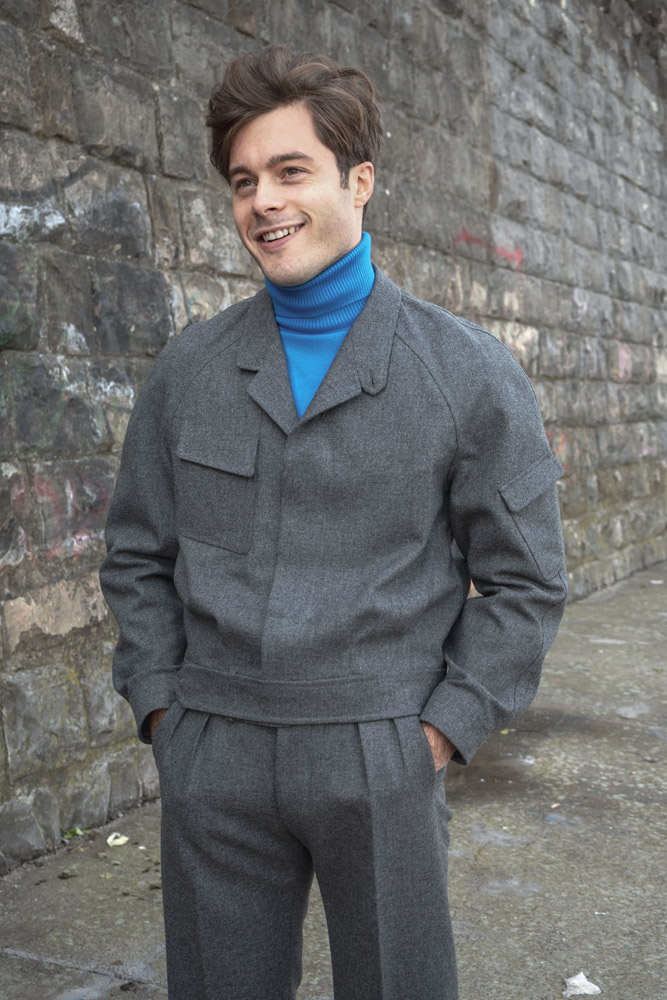 For the first time in our history we cannot travel and visit our clients all over the world.

Antonio Liverano started doing it thirty years ago, and since then we haven’t missed a single opportunity for a trunk show.

Being physically with our clients, guiding them in the choice of fabric and models, the execution of intermediate fittings and the basic task of taking measurements, all of which are the material and ideal prerequisites of our essence as tailors.

We are exiled at our own home, deprived of that dialogue whose synthesis is contained in the English term “bespoke,” literally translated as “spoken for someone,” which can also be interpreted as “commissioned after a dialogue.”

Not being able to bridge the geographical distances that separates us from our clients, we decided to direct our creativity in an unusual way, devising alternative ways to stay close even at a distance, alleviating as much as possible the nostalgia for a “boring routine.” After all, many epochal ideas (and even some important revolutions) were born in exile.

Send in Chronos & the Muses

So, here we are with the forced gift of time. Once the pressure of daily activities that Chronos’ thrift imposed on us no longer existed, we gave ourselves to contemplation and introspection, letting settle everything on which our gaze gradually rested.

What if the dialogue between tailor and its commissioner becomes a monologue? We return to a reflective dimension, assuming the ambivalent position of both the client and the executor. As tailors, we feel the innate duty to emphasize our skills, while as customers we are the final stop of the creative process; will competence be enough? Will there be ambition?

In a world where competence determines everything, will we be able to dissolve ourselves in the ephemeral nature of creative limbo and return to the surface in time as impeccable performers?

O Muses of love and mercy, and if a group of young tailors take a ride into the forest of design, will they be able to find their way back to Hephaestus?

We are people of rules and devotion to manners, measures, in perpetual motion towards perfection. Despite some initial perplexities, we gave ourselves clear rules and definitions. We will make a sartorial research and development workshop.

To divide the amount of work equally, we created three groups, each led by a senior tailor along with three other tailors and a member of the commercial team.

During the first two days, we questioned ourselves openly on a wide variety of topics, from those of a general nature to those most relevant to our niche of origin. The information collected was translated into preparatory drawings, thus inaugurating the actual creative process.

Each group, being the miniature version of the entire team, was completely self-sufficient and able to operate independently along the entire production cycle without any external interference.

The nature of the inspirations is extremely heterogeneous both in relation to individual tastes and to the multiculturalism of which the laboratory is an expression. In fact, there are about ten cultures that coexist and collaborate on a daily basis in the tailor shop.

The production process is divided into sequential phases, preparatory drawings, methodologies, and the processes necessary to transfer the stylistic idea into a garment draft.

Each member of the group, from the most experienced to the least, comes out strengthened by a similar experience because each has had the opportunity to articulate aspirations and inspirations without any filters, so that they were incorporated in the project.

In fact, as artisans, we constantly live with serendipity. The experience gained, among other things, teaches us to recognize it among the folds of the usual and turn it in one’s favor.

The number of problems never faced before grows and with it, but exponentially, the possibility of unexpected discoveries capable of solving a given aspect and motivating the search for new concepts.

The Birth of Venus – Disarming Beauty

Now, new orientations arise as a response to the needs that we feel as consumers of clothing who, while retaining a sartorial quid, must be able to conform to an energetic and tireless lifestyle. A subtle fil rouge lies at a more conceptual level and concerns the shared desire to go beyond sartorial orthodoxy, making design that pivots around function and not, as in most cases, vice versa.

Pegasus is the mythological domesticated winged horse that loyally accompanied Bellerophon on countless exploits – the most well-known being the killing of Medusa. We would like our Pegasus made of wool to resemble him in some way, embodying that innate attitude to dynamism and freedom that is often bridled, at least in the classic tailoring field, by a dogmatic orthodoxy for tradition.

Here, we emancipated the suit from its prescribed occasion of use, in favor of one more suitable to informal pursuits and contemporaneity, but showed respect for tradition by using classical materials and processes.

iThere are no comments

Begin typing your search above and press return to search. Press Esc to cancel.